United Enterprise and Company Limited, a  sister concern of United Group  signed a project  agreement with Bangladesh Railway on 18 March 2020 for establishment of a 500 Bed Multi-Specialty Hospital and a 100 Seat Medical College at Chattogram Central Railway Building (CRB) area on a 50 year contract on six acres of land at Public Private Partnership mode at a cost of BDT 399 crore . Under it, the construction and operation of a 250 bed international standard hospital will be started in thirty six months in the first phase, with the addition of 250 beds in the next phase of twenty four months and 100 seat medical college will be established within 12 years of the agreement. Mr. Moinuddin Hasan Rashid, Managing Director of United Group and  Mr. Nur Ahmad Hossain Project Manager and Chief Mechanical Engineer of Bangladesh Railway signed the agreement on behalf of United Group & Ministry of Railways respectively In the presence of Railway Minister Mr. Nurul Islam Sujan MP and Senior Secretary of the Ministry of Railways Mr. Mozammel Hossain. Speaking on the occasion, Railway Minister Mr. Nurul Islam MP hoped that the establishment of this hospital would prove to be a beneficial step to protect the health of the patients of Chattogram and Greater Chattogram as the largest public private project of the Railway Ministry so far.

In addition to the officials of United Group and United Hospital, Mr. Mohammad Shamsuzzaman, Director General of Bangladesh Railway and Chief Executive of the PPP project of the Government, Mr. Alkamas Siddiqui, were also present on the occasion. 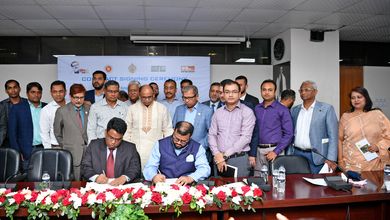